I’ve been to Yehliu Geopark several times. I want to help you determine whether it’s worth visiting. By providing a bunch of information.

I’ll cover the following points throughout this piece:

Read on and learn more.

What Is Yehliu Geopark?

Yehliu Geopark is a 1,700-meter-long cape formed by geological forces pushing Datun Mountain into the sea. Hoodoo stones coat the cape’s surface. And erosion throughout the years carved them into various rock formations I’ll cover in this guide.

The Queen’s Head (女王頭) is Yehliu Geopark’s most famous formation. And you’ll need to get in line to take a picture of it.

But why not just snap a photo of it from behind the rock?

Because people can only see the resemblance of a queen’s head if they look at the rock from the right angle.

Things to Do Inside Yehliu Geopark

Aside from strolling along Yehliu Geopark’s trails and taking pictures of the hoodoo rock formations, there’s nothing else to do.

You’ll find souvenir shops, street food vendors, and other stands at Yehliu Geopark’s entrance. I’ve never heard of or seen any noteworthy food items at these stands. But they’re a great way to fill your belly and hydrate during a scorching day.

Check vacation deal websites like Klook or KKday for deals, also. If you book for the first time on Klook app, they’ll give you 5% off.

How Do You Get to Yehliu Geopark

Those coming from Taipei City should take the 1815 bus. It’ll cost NT$83 and take an hour and 15 minutes to reach the closest stop to Yehliu Geopark (one way).

Those outside Taipei should take the Taiwan High-Speed Rail (THSR) or Taiwan Railway Association (TRA) to Taipei Main Station. From there, you have a couple of options:

All the buses will require you to depart at the Yehliu Geopark stop.

You could also hail a taxi, order an Uber, or rent a car.

Attractions nearby Yehliu Geopark are as follows:

I’ve been to Yehliu Geopark Te Chan Jie, Green Bay Beach, and Gui Hou Fish Harbor. The Harbor has various vendors selling seafood and seating. And the shrimp I had there tasted great.

And Green Bay Beach, otherwise known as Emerald Bay (or Feicui Bay), is a sand beach. That’s it. To learn more about this beach, and other strands of sand and gravel along Taiwan’s coasts, explore a separate guide.

Wanli UFO Village is a semi-abandoned beachside resort with 6 Futuro and Venturo (UFO) houses. The resort never took off, so the owners left the homes to rot. There’s nothing to do here other than view interesting architecture.

And you can’t enter these homes. As there is broken glass and unstable furniture everywhere.

Plan on staying near Yehliu Geopark?

Places to Stay Near Yehliu Geopark

Close to the Guihou Fishing Port and a 15 minute walk from the beach. 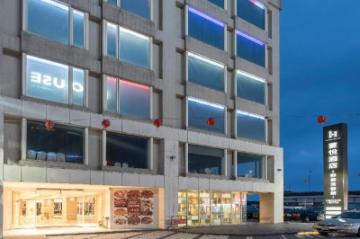 How Did Yehliu Geopark Form?

There isn’t too much to do other than look at unique rocks and walk. But Yehliu Geopark is worth visiting. It’s affordable to enter and will give you views only accessible in Taiwan.

Explore my other guides of things to do throughout Northern Taiwan.

Find a bank to use overseas